In Saladin Province in Al Shahama Camp, Blumont/IRD coordinated with Bint Al Rafidain, a local NGO, to deliver a speech on the origin of International Women’s Day, the internationally recognized rights of women as stated in the Universal Declaration of Human Rights and women’s right to live without gender-based violence. Colorful ribbons decorated with flowers were distributed to women present at the event. 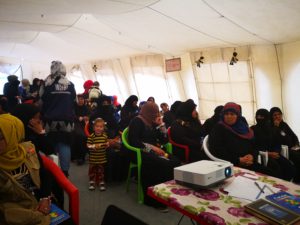 In Kirkuk Province in Laylan 1 Camp, Blumont/IRD, in coordination with the local NGO Jiyan Foundation, organized a public speech session, a play performed by a group of IDPs (including women) and a dance performance. Those activities were designed to increase awareness about women’s rights and gender equality. A UNHCR representative and more than 150 people—mostly female IDPs from Laylan 1 Camp—attended those activities. 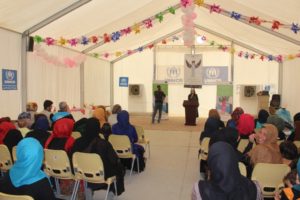 An employee from Jiyan Foundation talks about women’s rights and their roles in society.

In Nazrawa Camp, which is also situated in Kirkuk province, Blumont/IRD held an exhibition to display handcrafts made by female IDPs, during which a young displaced man recited a love poem about women. Traditional dance by a group of young dancers followed. 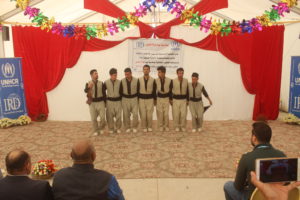 A group of volunteers performs a traditional dance.

Also at the exhibition in Nazrawa Camp, a displaced woman told her story of fighting for financial independence after she went through a divorce. She recounted how tough, but doable, it was to work to raise her seven children.

“Be brave!” the woman encouraged female IDPs present at the exhibition, referring to financial independence.

These celebrations were a part of Blumont/IRD’s Camp Coordination and Camp Management/Conflict Resolution and Resilience Building (CCCM/C2RB) programs. CCCM provides camp management in four camps for internally displaced persons (IDPs) in Iraq, including accommodation and community mobilization activities. C2RB improves the lives of individuals in Iraq by identifying and implementing solutions to mitigate violence and conflict among IDPs and host communities. They are both funded by UNHCR.