Shifting Norms to Empower and Engage Girls in Sports

Normally, in the rural context of Sindh, girls used to be first to engage in domestic chores and labor and last to be given learning and sports opportunities. A similar situation existed in the village of Umed Ali Junejo when Sindh Community Mobilization Program (CMP) initiated its intervention in November 2013.

This remote village, mainly dependent on agriculture and livestock, is adjacent with Baluchistan province and is home to diverse communities, including the Brahui, Junejo, Jamali and Oad minority groups. Though these communities are diverse in their customs, one thing was common among all of them: none of them were welcoming to girls’ education, recreation and empowerment.

There were 53 girls enrolled in Government Boys High School, Umed Ali Junejo—one of the construction schools of Kamber Shahdadkot—but they didn’t attend classes regularly; considering social norms, neither girls nor their parents were comfortable with co-education. Besides social norms, the lack of basic facilities, such as functional separate toilets for girls, female teachers and a boundary wall were hurdles in girls’ regular attendance.

The CMP team engaged the community through meaningful participation and stressed the importance of women’s participation in decision-making bodies. As a result of continuous efforts and sub-committees’ restructuring, eight women joined sub-committees and began promoting girls’ education, recreation and gender mainstreaming. When CMP shared the idea of a Girls’ Sports Gala in 2017, the School Management Committee (SMC), the community, parents and girls themselves initially had reservations. Although they thought playing badminton or cricket in front of men and boys may be questionable, school administration and CMP conducted dialogue, encouraged their participation and assured a safe and secure environment. After continuous mobilization, some community members agreed to allow their girls to participate in the first Girls’ Sports Gala in 2017. It goes without saying that all participants performed very well and earned appreciation, awards and rewards, which not only boosted their confidence but also encouraged other parents to allow their daughters to become involved in extracurricular activities. 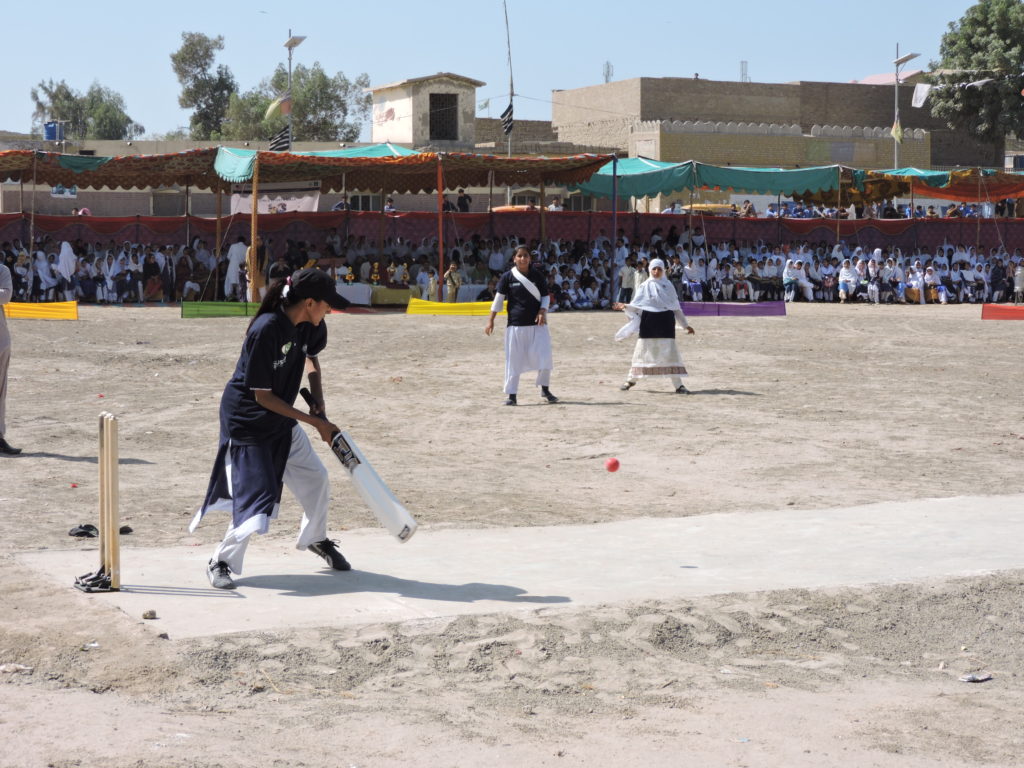 This year in the 2018 Girls’ Sports Gala, 850 girls from six CMP and eight non-CMP schools of Kamber Shahdadkot enthusiastically participated, including 20 girls of village Umed Ali Junejo. The gala earned lots of appreciation from all corners of the district, including from the Deputy Commissioner, District Education, Health, Revenue and Social Welfare Departments, and was highlighted in print and electronic media. The event provided entertainment to a wide audience of 800 people, and players’ joy had no limits as they were honored with a reception in their school and received a cash prize worth PKR 120,000 from different participants, including the Deputy Commissioner, the Senior Superintendent of Police and the District Education Officer.

“We used to play games only in our home, but it was the first time we got an opportunity to play Cricket in front of many people, a majority of them male. Initially I was very nervous and afraid, but I restored my hope and played very well and, finally, our Girls’ Cricket Team turned out as a shining start and pride of Kamber Shahdadkot. Through this event we also received courage and respect from parents and community,” Ms. Pathani, Cricket Team Captain, shared. She further added that, “We are thankful to CMP for providing us equitable opportunities of learning and growth.”