In Deir ez-Zor governorate in Syria, farmers are using new equipment and methods to cultivate their land.

Just two years ago, farmers in the region felt they had no more options but to leave behind their homes and work. More than ten years of war in Syria had taken a toll on the agriculture sector.

The Filling the Void project, funded by the Syria Recovery Trust Fund (SRTF), was designed to rehabilitate the region’s water infrastructure and help farmers recover their land. As SRTF’s implementing partner, Blumont worked to restore water access for farmers and rebuild local capacity to support the agriculture sector. From 2020-2021, Filling the Void activities reached over 150,000 people in Deir ez-Zor.

As crops were harvested, farmers reaped the benefits that Filling the Void activities had sewn. The farmers’ average wheat yield of 3.4 tonnes per hectare was 70 percent higher than that of other farmers in the area. Community leaders took note, and earlier this year, local governance recognized the work and Blumont’s team in a ceremony celebrating project achievements.

“Filling the Void was the first project [in Deir ez-Zor] to target farmers and the largest project in terms of agricultural inputs and equipment provided,” said Mohamad Al-Mansour, head of the Deir ez-Zor General Administration of Agriculture. “If it wasn’t for the Filling the Void project, many farmers would be out of the country looking for work.”

The ceremony, which brought together local government officials, farmers, women’s groups, and other community members, acknowledged the team’s commitment to restoring agricultural livelihoods.

“The results of the Filling the Void project directly affected the lives of farmers by combating poverty and unemployment, which contributed to reducing many problems in the region,” said Majed Al-Da’aboul, the Head of the Deir ez-Zor Ministry of Economy.

Prior to the project, with key infrastructure damaged by conflict, water had not been reaching farms and irrigation was virtually impossible for many farmers. As water availability fell, the costs of agricultural inputs, such as seeds and fertilizer, skyrocketed.

To take on the water challenge, Blumont’s team rehabilitated a critical canal, several pumping stations, and a water distribution network, which service the farms as well as seven local communities.

Blumont worked with eight farming cooperatives in Deir ez-Zor during the project to build their capacity. Seven cooperatives received two types of material support, comprising agriculture supplies (such as seeds, fertilizers, and pesticides) and farming equipment, and an eighth cooperative that was brought into the program after the planting season also received farming equipment.

For years, these farmers had virtually no means of purchasing new equipment to farm their land with. Many were using decades-old machines. Others were using outdated, manual methods of harvesting. Compounded with harsh conditions and high prices for seeds and other inputs, farmers were considering leaving Syria to find other work. 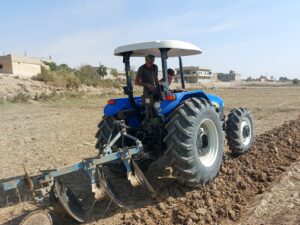 Farmers using new equipment they received through the Filling the Void project.

In total, our team distributed agricultural supplies and farming equipment to 1,093 members of the cooperatives. Blumont trained the cooperative members on how to use the brand-new machines, which included eight combines and 11 tractors.

“[Farmers] were depending on approximately 20 workers, mostly women, to harvest only one hectare per day,” said Yusuf Abduallah, the Filling the Void Livelihoods Coordinator. “After the cooperatives received the modern combined harvesters, farmers can now harvest up to seven hectares per day.”

After the interventions, each cooperative had more than enough wheat for their own needs and were able to store and sell their surpluses. By supplying local markets with the surplus, the cooperatives are making wheat more affordable and accessible, and addressing food insecurity in the region. The farmers are using the additional income from selling their crops to pay for education and health services for their families. 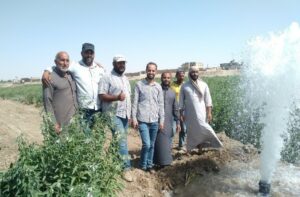 Farmers in cooperatives throughout Deir ez-Zor have renewed direct water access that they can use to irrigate their crops.

Farming cooperatives in Deir ez-Zor now have direct access to water that they can use to irrigate their crops. Now, with reliable water access, new equipment and inputs, and new skills, farmers in Deir ez-Zor are confident that they have the foundations for a sustainable income.

“We are an agricultural society and depend on farming to meet our needs,” said Muhammad al-Jassem, a farmer from Deir ez-Zor. “The support we received helped us cultivate and harvest the entirety of our land and also provided us with incomes to pay off our debts, stabilize the region, and prevent young people from migrating.”

“The Filling the Void project is considered a pillar of stabilization for a region that was suffering from a major economic crisis.”

– Khatun Al-Khalaf, Deputy Head of the Ministry of Economy in Deir ez-Zor, Syria