A local non-governmental organization (LNGO) called Mena has successfully reapplied a theatrical technique used by International Relief and Development (IRD)/Blumont in a camp of internally displaced persons (IDPs) in Iraq.

The technique comprises using an urgent problem that faces IDPs and host communities as the theme of a play to bring it to the attention of an audience and then carrying out an interactive discussion with the audience at the end of the play to find a suitable solution.

The theatrical technique was first called to the attention of the Mena organization during a play by IRD/Blumont on 3 June 2018. On that day, 10 actors trained by IRD/Blumont performed a play on underage marriage, for an audience of 61 people in the Teachers’ Syndicate in Baquba City in Diyala province. The play lasted for about one hour. It was followed by an interactive discussion between the audience facilitated by a theatre specialist. Over half of the audience participated in the interactive discussion which took almost two hours.

Iman Hassan, head of Mena, was among the audience members in attendance at the IRD/Blumont play on 3 June. She found the idea of involving the audience in finding a solution to an urgent problem compelling. She had not seen such a technique before. 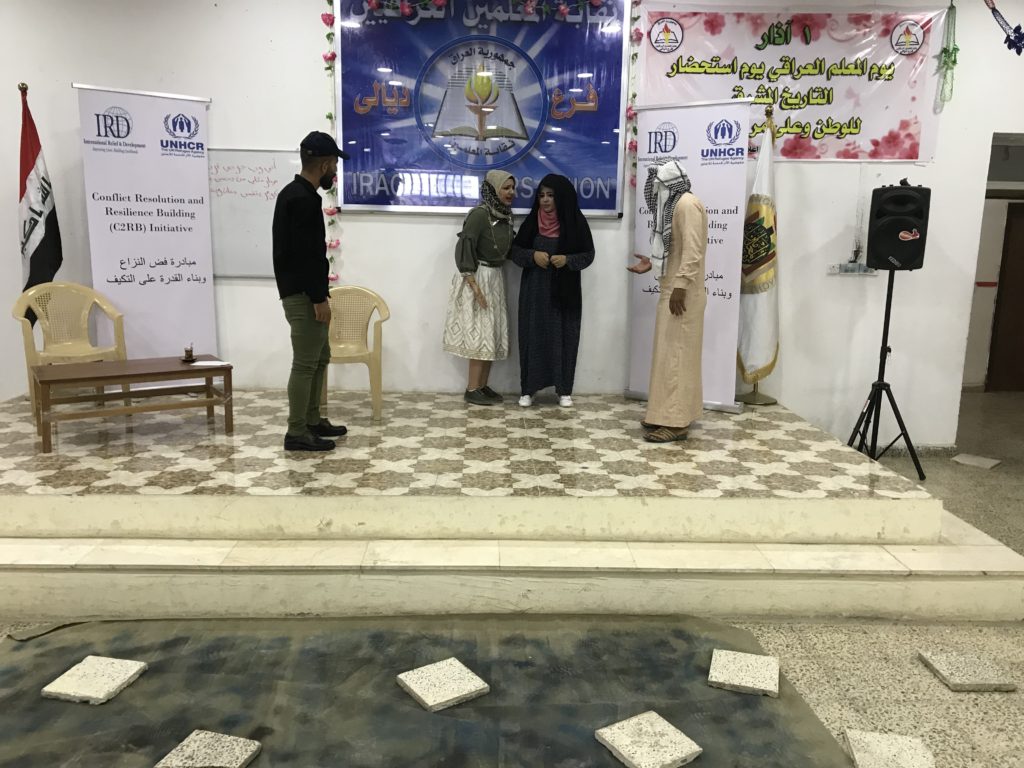 Mrs. Iman decided to reapply IRD/Blumont’s technique. Her organization got permission from IRD/Blumont to use the technique and the theme of the play, underage marriage, with some modification.

Four actors rehearsed for the modified play at Mena. They later performed two 30-minute plays for 60 IDPs at Narjis Center. The performances were followed by interactive discussions with the audience. Mrs. Iman said the audience pointed out a lack of awareness as the reason behind early marriage. They, she said, promised to do their best not to let their young girls get married too early.

“Interactive theater is the most appropriate way to get to the problem and [get] realistic treatment,” said Mrs. Iman. She added that her organization would continue reapplying the IRD/Blumont’s theatrical technique in the future.

The theatrical technique is a part of IRD/Blumont’s Camp Coordination and Camp Management/Conflict Resolution and Resilience Building (CCCM/C2RB) programs. CCCM provides camp management in four camps for internally displaced persons (IDPs) in Iraq, including accommodation and community mobilization activities. C2RB improves the lives of individuals in Iraq by identifying and implementing solutions to mitigate violence and conflict among IDPs and host communities. They are both funded by UNHCR.