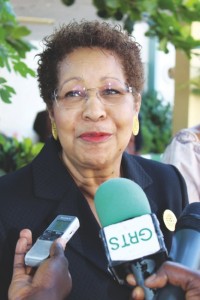 From the Daily Oberver Gambia:

The forum brought together key stakeholders to reflect on the successes and challenges of the previous season, to open a dialogue between buyers and sellers, and to assess the prospects for this current season.

According to the US Ambassador, the project targets 20,300 smallholder cashew farmers and processors within the major cashew growing region in Senegal and The Gambia.

The project, she said, serves to remind them of what can be achieved through partnership and collaboration. We are of course fully aware that it is you the stakeholders, growers, and traders who have provided the crucial buy-in and commitment needed to ensure the continued success of this project.

[bctt tweet=”One step in the right direction toward alleviating poverty in The Gambia- U.S. Ambassador Alsup on CEP 2″]

“As we approach the final year of CEP2,” she said, “it is important that they pause to consider its impact so far. I have been told that the previous phases benefitted about 3,000 cashew farmers and processors in The Gambia, and that the projects focus on optimising the cashew value chain not only yielded an increase in the quantity of the product, but also a marked increase in the quality.”

Ambassador Alsup indicated that in order for The Gambia to maintain its reputation as a provider of sweet tasting, high-grade cashews, and to remain competitive in the world market, the emphasis must continue to be on quality. Clearly, cashew harvesting is becoming big business in The Gambia, and that is the beauty of this initiative; it treats the production and processing of cashews as exactly that a business.

She said the goal is to capitalise on this increase in quality and turn it into higher profits for all actors in the value chain. “The cashew,” she said, “is truly a product that merges business and developmental goals. We want to see an increase in the incomes of cashew farmers and producers, for this is one step in the right direction toward alleviating poverty and increasing the standard of living of Gambians throughout the country.”

The meeting was the fifth forum of its kind organized by the project implementer, IRD.