One aim of Peace through Development (PDev II) is to empower youth through youth-led activities including participatory theater.

Participatory theater involves on-stage performers interacting with the public to tackle real issues. Throughout the event, the public joins in to change or correct a situation, attitude or behavior. In this way, participatory theater combines entertainment and education in order to stimulate positive social changes. The actors pictured spent the morning speaking to members of the community to identify potential social problems they could address during the theater performance later that day. 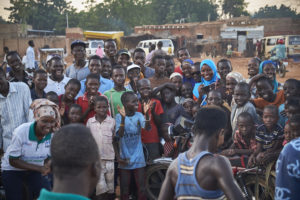 After speaking amongst themselves and with the community, the actors decided to put on a production that dealt with problems that arise during football matches. Conflicts can erupt between teams during the games and result in violent confrontations between the players. This conflict can later disrupt community life by creating tensions between parents of the athletes. 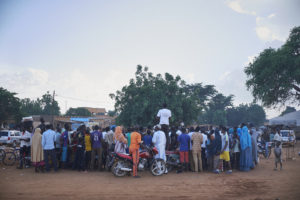