Home-based business owners in Jordan have the potential to play an important role in the country’s economy, from boosting household incomes to creating jobs and livelihoods for women, young people, and refugees.

On December 21, six months of UNHCR-funded efforts to support, expand, and formalize home-based businesses culminated in a public bazaar in Amman.

Nearly 70 home-based business owners brought their products and skills to the “Shougly Men Beity” (“My Work From Home”) event to share their work with new potential customers. The entrepreneurs—both Jordanians and Syrian refugees—showcased an array of items and services, from traditional mosaics to pickles to custom embroidery. 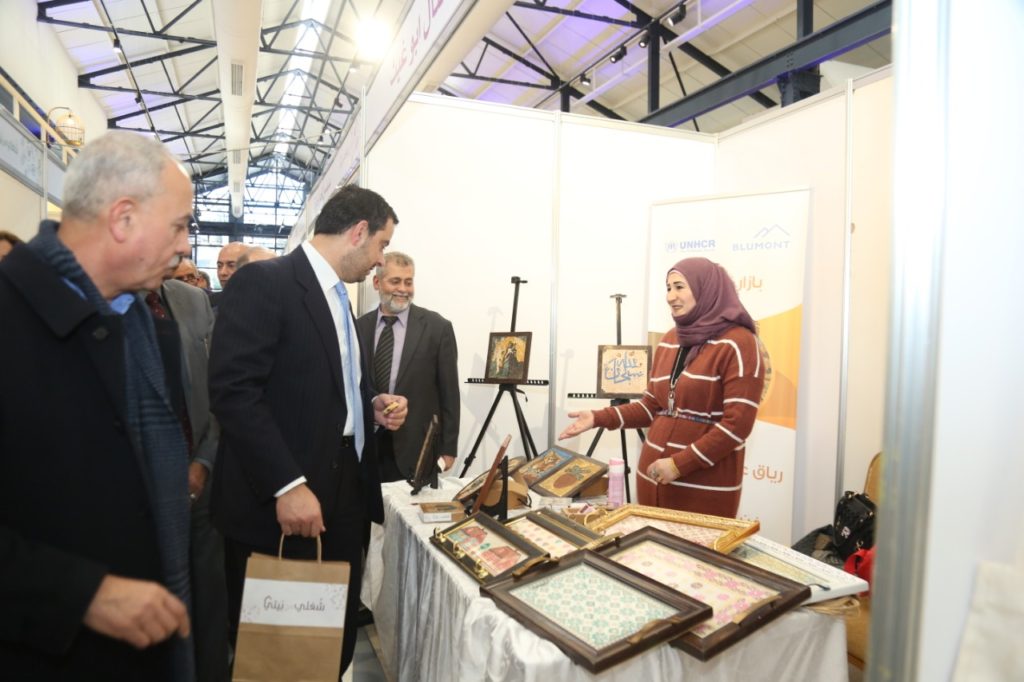 A home-based business owner displays her product at the bazaar

The event was organized by Blumont, with the support of UNHCR Jordan, and was officially opened by Dr. Tariq Mohammad Hammouri, Jordan’s Minister of Industry, Trade, and Supply, in his capacity as the key Sponsor. Additional remarks and participation were received from entrepreneurs, members of the private sector, and other stakeholders.

In his opening speech, Dr. Hammouri emphasized how new licensing laws have opened pathways to help Jordanians and Syrian refugees legitimize their work.

“We have established laws and regulations to overcome all challenges facing these home-based businesses,” he said.

“Today, we celebrate with our Syrian brothers and sisters who have started their own registered and licensed businesses,” she said.

Many of the participants were supported by Blumont and partners like Leaders of Tomorrow through the UNHCR-funded Jordan Livelihoods Project, which aimed to improve, expand, and formally register and license home-based businesses. The project successfully formalized 89 Jordanian and 19 Syrian refugee-owned home-based businesses across five governorates of Jordan with the second half of 2019.

Many of the business owners face challenges related to disabilities, gender, and age, but have overcome adversity to pursue their talents. Raouf makes traditional mosaics despite a disability in his hands. With such intricate detail needed for the work, his instructor originally believed he would not be able to complete training. He overcame the challenge and completed the courses—one of only two to do so out of the class of 12.

“Never give up,” Raouf said. “You will face many obstacles, but it will work out eventually.”

The event also sought to educate informal home-based business owners on the registration process and offer guidance on improving and expanding businesses. Interactive sessions engaged entrepreneurs throughout the day, including sessions on the registration and licensing process by the Ministry of Municipal Affairs and Chamber of Commerce, product packaging by JoPack, and food processing by the Jordan Food and Drug Administration.