Reclaiming a Playground for Community Recovery

Earlier this year, children in San Antonio de Padua, Colombia, cheered as they ran to explore their new playground. For longtime residents, the space was more than just a new place to bring children to play. Built on land formerly associated with the violence and internal displacement that plagued this region of Colombia, the new playground was a powerful milestone in the community’s recovery.

“I lost my son due to the war. Today, I feel joy from seeing the children’s playground as an inspiration of happiness and trust,” said one woman at the event. 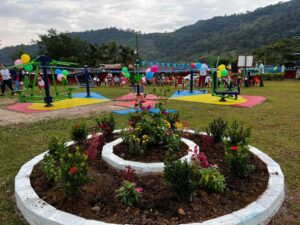 The new playground in San Antonio de Padua is a sign of hope for the community.

For weeks, community members and the municipal government worked alongside teams from the Closing Gaps program to transform the land. Funded by the USAID Bureau for Humanitarian Assistance, Closing Gaps strives to improve emotional wellbeing, support community action, and encourage participation in activities that help individuals and towns recover after conflict.  Initiatives designed around meaningful cultural and social practices can help towns rebuild community connections and regain a sense of pride and ownership.

Residents of San Antonio de Padua had wanted to restore the playground for a long time. Children avoided the area and parents dreamt of giving their children a new place to play – a step on their journey to rewrite their community’s history.

Women designed the playground to be surrounded by gardens, including one in the shape of a butterfly, representing the role of women in their community. They also chose to portray strength, persistence, and bravery through various symbols as a way to inspire the children.

“I feel happy and proud to be part of this resilient community. We have been able to physically change it and have emotionally moved on,” said one man who attended the playground’s inauguration. 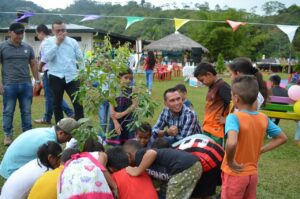 With gardens and a playground, the space has been reclaimed as a place of peace and community.

With this revitalized space for play, children in San Antonio de Padua feel they are part of a safe environment where violence is not a threat. They can play without worry and build positive, new memories in their community.

The town has also been using the gathering space for other emotional support activities organized by our Closing Gaps team. We will continue working with residents and local officials to lead San Antonio de Padua’s community rehabilitation plan through August 2022. Then, the community will take it over, working hand-in-hand with the local government to keep building for the future.