From Refuge to Return

People who have been forcibly displaced dream of returning home one day. The opportunity to return is both exciting and challenging, as the homes and lives they once led have greatly changed.

For World Refugee Day, we collected stories from people who have come back to Iraq after years away. Some are just leaving displacement camps and making their way home; others are already getting their footing as they start their own businesses or resume their studies.

Wherever people are in their migration journey, our team is there to meet their evolving needs. From assisting new arrivals acclimate to a displacement camp; to providing services and spaces where families can cope with challenges and strengthen resiliency; to helping communities resettle and rebuild, we are committed to doing what we can to provide support—and hope. 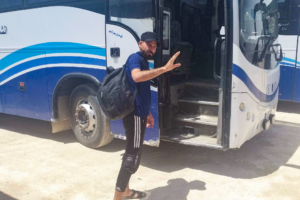 Hussein boarding the bus to Iraq from a displacement camp in Syria.

Hussein: Taking his family home and resuming his studies.

When asked how he was feeling about returning home to Iraq, Hussein said he was experiencing “unbelievable feelings.” Hussein, his wife, and their children checked out of a Blumont-managed refugee camp in June and have since arrived in Iraq. Finding a job in the camp was hard, he said, and he was looking forward to studying again and eventually landing a good job. Hussein hoped that his hometown would be a safer, better place to live than when he left it—a place where he can pursue his dreams. 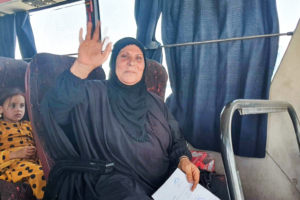 Nazha left northeast Syria in June and returned to her native Iraq.

Nazha: On her way home to live with her children under one roof.

Nazha could hardly wait to board the bus to Iraq. She told our team, “I’m waiting for the moment when I arrive so I can kiss my homeland and smell its soil.” She and her children are finally going home after staying in a camp in northeast Syria for several years. They will be living under one roof again, after a long time living in tents. First, they will stay in another camp—in Iraq this time—before making the last leg of their journey home. She said she will bring the leadership skills she gained from participating in the residents’ council in the camp wherever she goes. 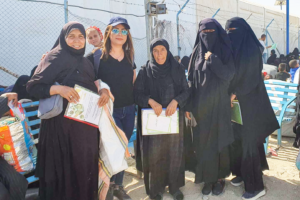 Tafha, center, said goodbye to neighbors and a Blumont team member upon leaving for Iraq.

Tafha: Returning home to her children, grandchildren, and country.

“I’m longing to meet my children, grandchildren, and country,” said Tafha on the day she was scheduled to return home to Iraq. Over the previous months, our repatriation team had guided her through the process of leaving the camp and registering to go home. The team answered her questions and made sure she had nothing to worry about, especially when it came to her safety. Tafha said that it would be “a great joy to get out of the camp and embrace my homeland again.” Her ultimate goal, she said, was living at home in peace with a sense of dignity and security. 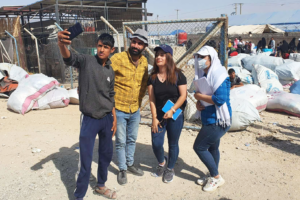 Abdullah, left, returned to Iraq to pursue his studies after living in displacement in Syria.

Abdullah: Going home to settle down, study, and work.

Young and ambitious, Abdullah was ready to take on new opportunities and challenges in his home country of Iraq. Leaving the camp with his mother and siblings, he was most looking forward to settling down in their own home and feeling safe. Abdullah said he will finish his schooling and find a job as soon as he can. On the day he left he told our team, “The Blumont team is my second family, you are always with us in our joys and sorrows. I will miss all of you and will keep in touch while I am in Iraq.” 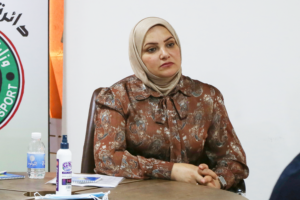 Lara, who returned to Iraq recently, applied for support from the AMAL program to launch her tailoring business and employ other women.

Lara: Setting up a home-based business.

After eight years away from home, Lara and her family were finally able to go back to Baghdad. As a tailor aspiring to create a business that could provide job opportunities for other women, Lara participated in the Achieving Measurable Access to Livelihoods (AMAL) program’s training sessions to learn how to develop her business. Lara will start working out of her home and then hopes to move into a space where she can employ others. She told us, “I didn’t know how to expand my business before the training, but now I have a plan to keep expanding until I have my own shop.” 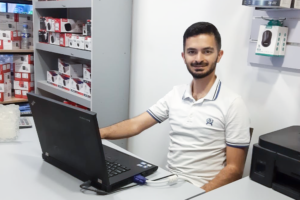 Hussein started his own technology business when he returned home to Iraq.

Having just returned to Iraq, Hussein wanted to start a business and regain stability after living abroad for five years. He applied for the AMAL project’s training program to support his new technology business. His goal is to help other small businesses that are shifting from old handwritten processes to computer-based systems. The training helped him set up a plan for scaling up his work. “I benefited a lot from the basic entrepreneurship training,” he said. With Blumont’s support, he is now running his own business and supporting his family.