Syria has the largest population of internally displaced people in the world, with 6 million displaced within its borders, many living in camps or informal settlements.[1] Blumont manages and works in camps across northeast Syria, supporting individuals and families adapting to a new way of life while processing the trauma of displacement.

Our team manages one of the largest camps in the region, where people from around the world live in close quarters. The stress of displacement and unfamiliar surroundings, combined with limited access to resources and residents from diverse backgrounds can lead to heightened tensions. The Blumont Community Mobilization Team steps in to promote social cohesion, resolve disputes, and make sure residents know about helpful services available in the camp.

Mobilizing for peace and co-existence

As the summer season approached, a disagreement over a shared water point arose amongst families living in one section of the camp. Our team worked with the Reconciliation Committee, a group of residents trained by Blumont staff to promote peaceful co-existence in the camp, to facilitate discussions between the families. The conversations helped the neighbors better understand one another’s perspectives and then work toward a solution. 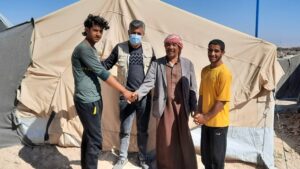 “Their initiative [to resolve the water dispute] has brought life back to our block, the spirit of teamwork, and helping each other,” one woman shared.

The Community Mobilization Team also conducts regular sessions on the importance of tolerance in promoting peace and fostering connections. As part of these sessions, residents are encouraged to lead meaningful activities or discussions that engage others. This helps people to create a sense of purpose in a situation where many feel lost or discouraged, while also providing a new shared experience that establishes a community connection.

Coming together to help others

Aziza, a 40-year-old woman from Iraq, found comfort at these community sessions. Ever since she arrived at the camp, she had struggled with stress and the emotional toll displacement takes. With time, the sessions helped her make new friends and regain her confidence. 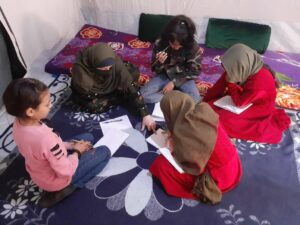 Aziza helps young girls with their homework as part of her tutoring service.

At the sessions, our team noticed that Aziza could read and write—which is not common amongst women in the camp. Seeing an opportunity for Aziza to get more involved, our team asked if she could use these skills to help other residents.

“I spoke with Aziza about the joy of volunteering during one of our sessions,” said one member of the Community Mobilization Team. “I was surprised when, a few days later, girls in our activity tent showed me their notebooks filled with Arabic numbers and letters that Aziza had taught them. She began forming study groups with children in her tent to review their school lessons and help complete their homework assignments.”

During Mother’s Day celebrations, she helped children write greeting cards for their mothers and read them out loud.

Aziza’s tutoring service for school-aged children became well-known in the camp, and more parents started sending their children to her review sessions. These acts of service inspired other women in the camp to volunteer.

As Aziza’s experience inspired others, her work and passions also brought her new opportunities. Our team helped her to apply for jobs with humanitarian organizations in the camp—and her impressive skills earned her a paid position at a children’s center run by Save the Children.

“I used to think of a job only as a way to make money and become independent,” Aziza said. “At the Blumont sessions, I learned better than this. I realized that volunteering is a renewal of the soul, because spreading joy in other people’s lives is priceless.”