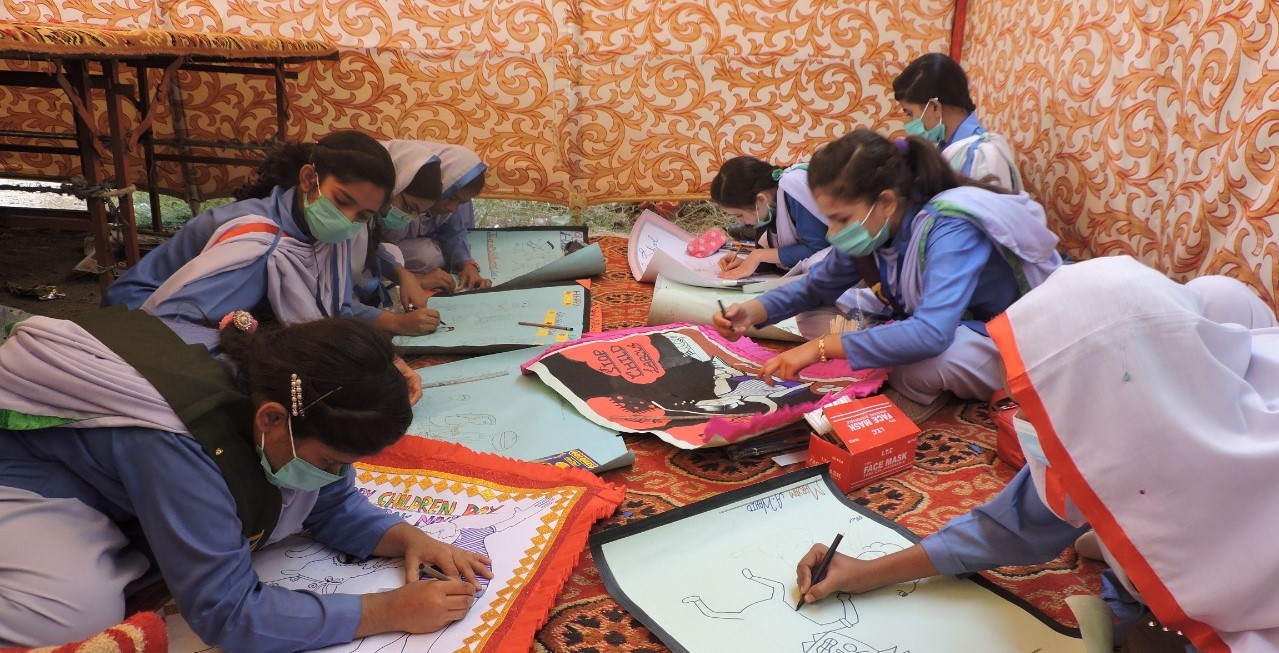 As part of USAID’s broader Sindh Basic Education Program, CMP aimed to address educational challenges including low enrollment, under-resourced schools, insufficient governance and leadership, and lackluster buy-in from the community. In 2013, 30 percent of school-aged children in Sindh were not enrolled in school.

Over the course of the program, our CMP team reached 750 target schools and activities benefited over 300,000 students. Efforts succeeded in improving school facilities, enrolling more students, and strengthening education governance in Sindh. 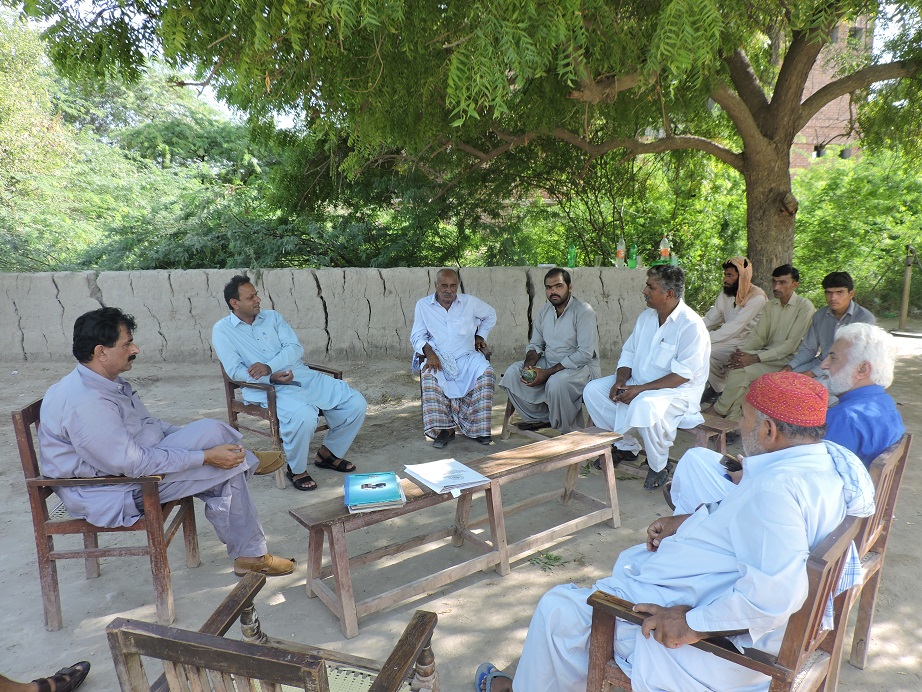 A meeting of a school management committee.

Community engagement was integral to CMP. Communities were skeptical at first about the vision to rebuild schools because the existing system was not reliable. Our team made an effort to build trust with parents. We fostered meaningful engagement and opportunities for them to provide input on renovating schools and showed them clear examples of how more resources, better teachers, and stronger management have benefited communities and made education worthwhile.

CMP engaged local school management committees as a primary platform for community involvement and a driving force to improve education in Sindh. The committees gave teachers, school administration, parents, and students, a voice in decision-making, helping to cultivate local ownership and pride in schools. More than 16,000 people were trained to participate in the committees and take on the leadership of activities such as enrollment drives, donation campaigns, and school improvement plans. 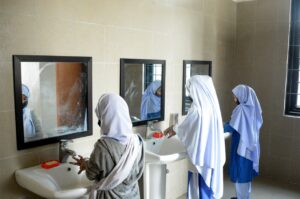 Girls in a public school used a newly renovated bathroom.

The school management committees managed 420 small grants that funded locally selected priorities from their school improvement plans. These small investments had a huge impact, allowing schools to provide facilities such as functioning toilets, electrical fixtures, and drinking water, as well as fund extracurricular activities and events.

In communities where CMP worked, the committees have become active and energized advocates for schools. “The head teachers and committee members saw how CMP was getting in-kind contributions, like uniforms, school supplies, and land; now, the committees are doing it themselves,” said Abdul Jabbar, CMP’s community engagement advisor.

Women as decision-makers and leaders

Women were a major driver of community engagement and played an important role in bringing more girls into the school system. Our team met with mothers to discuss the benefits of enrolling girls and the broader plans to improve public schools. To get women more engaged, the committees reached out to their communities, which evolved into women taking on leadership roles in committees. 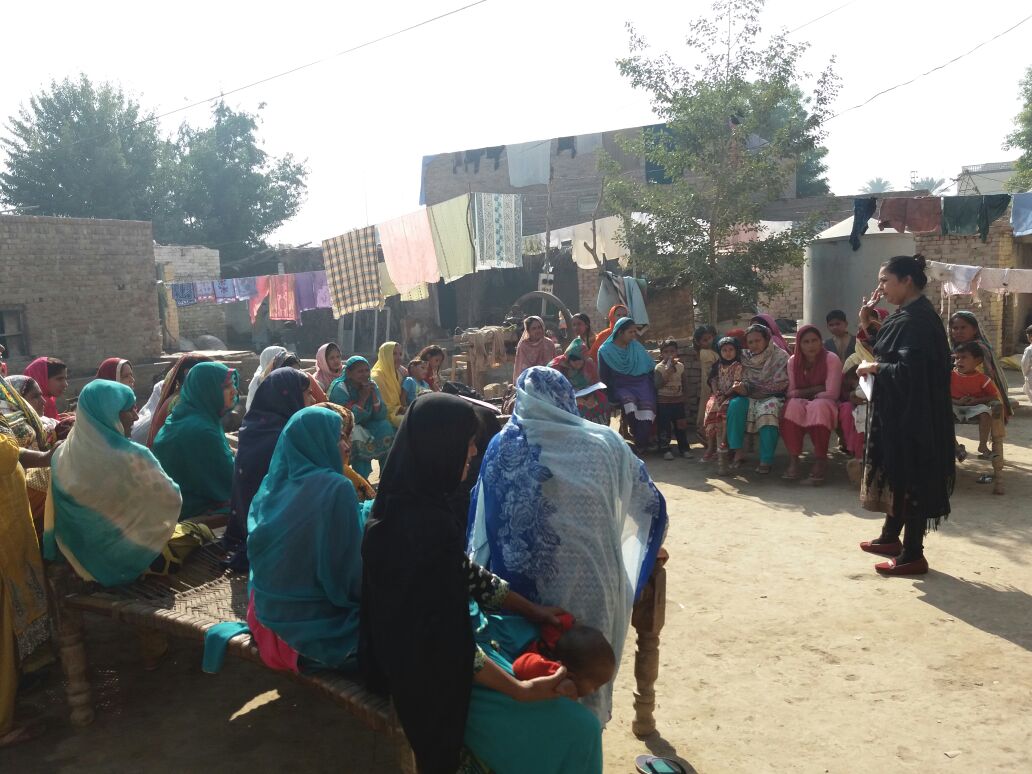 Ms. Sheikh, right, met with women from all over Sindh to get them involved in school affairs.

“Education enhances opportunities for women and girls and also enables them to change their lives in the social and economic spheres,” said Sheikh, who encouraged women to trust in the education system. As a woman from a low-income background herself, Sheikh was a paramount role model for the women whom she worked to inspire.

By 2022, girls’ enrollment had increased by 56 percent since the start of CMP.

A key factor was encouraging women to engage in SMCs and other community forums so that their voices were heard.

“Women, who invest in their communities and families, became members of school management committees, leaders, and advocates for their children. There was a big challenge in the beginning that women were not part of decision-making; especially on girls’ enrollment dialogues,” said Jabbar. “We thought women should come forward and be part of these committees to contribute their roles and responsibilities.”

By the time CMP closed, women held all types of roles across the school system, especially in committees. 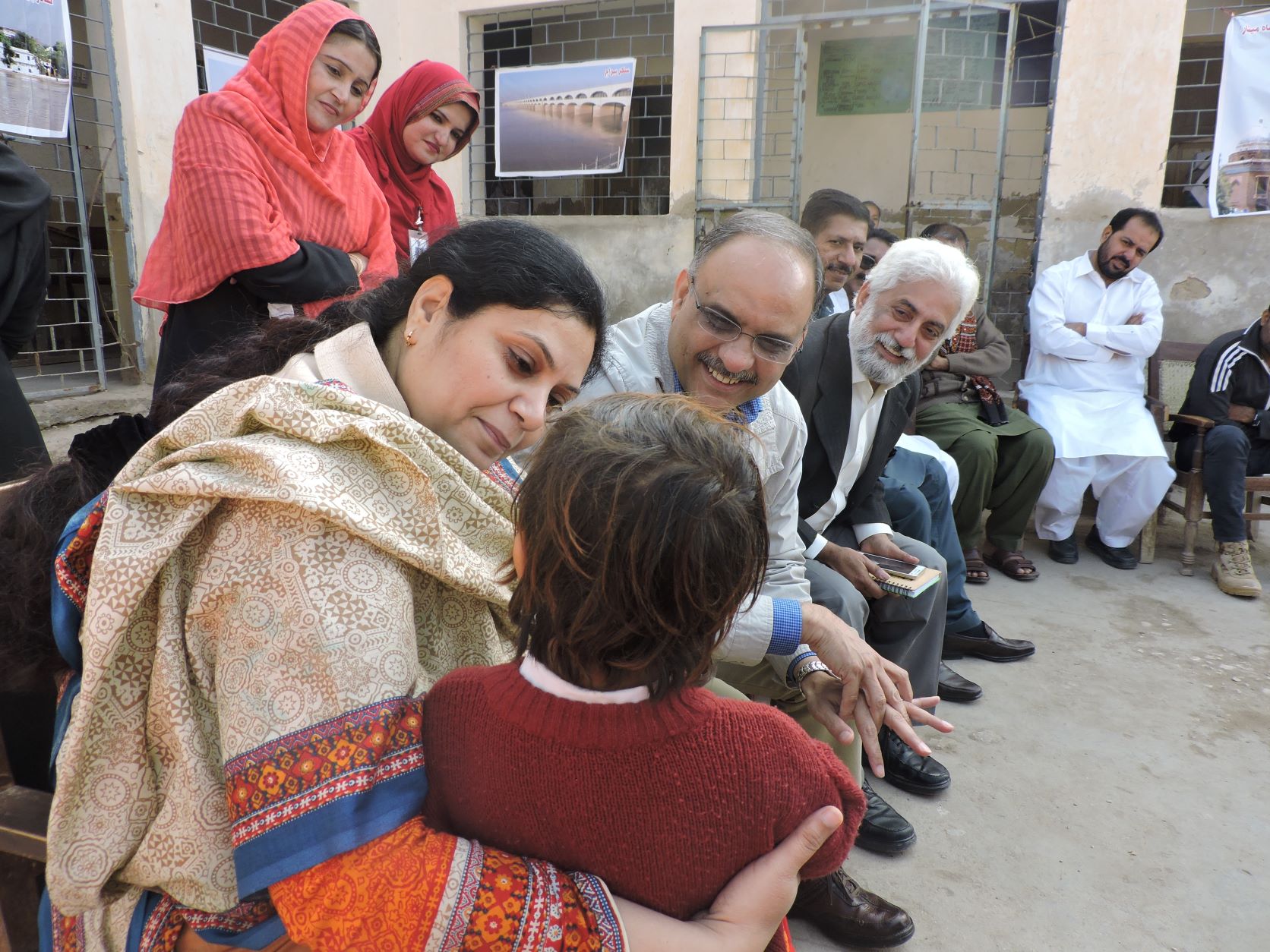 Ms. Sheikh at a CMP event with other community stakeholders. 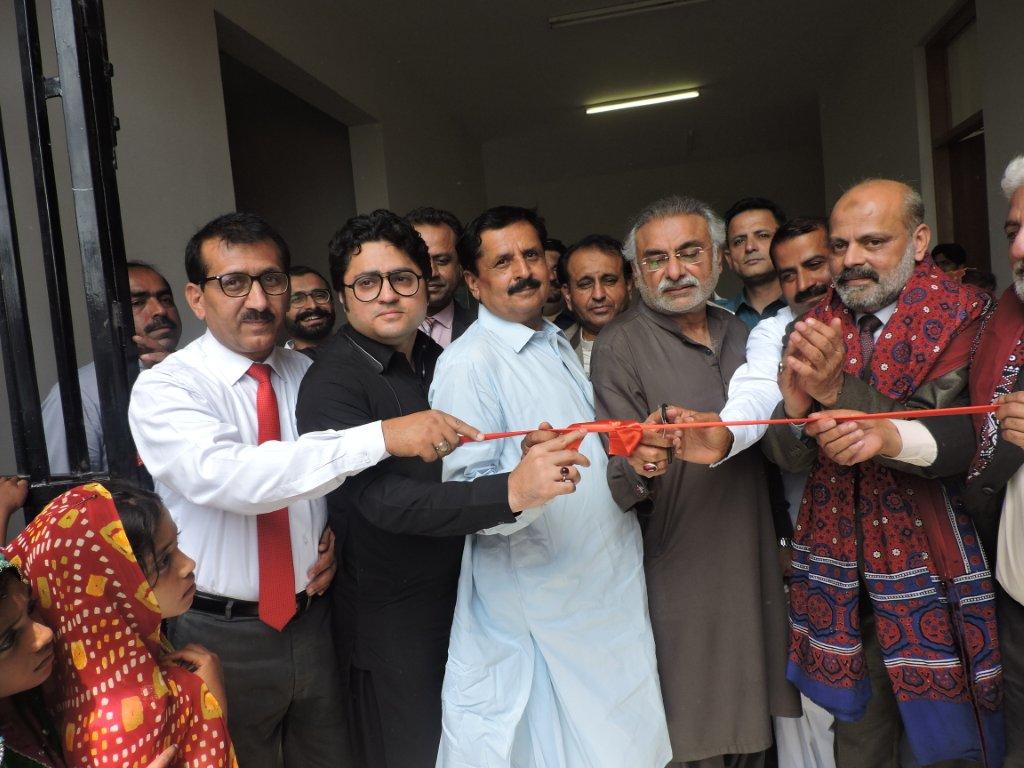 Communities in Sindh need a solid governance and management framework to ensure that progress in schools is sustained.  Training and engagement with local governance was an important element of CMP, with a particularly significant impact seen in the establishment of public-private partnerships (PPPs). To support the Government of Sindh’s School Education and Literacy Department’s initiative to privatize school management, CMP provided technical assistance to design a pilot program for utilizing PPPs in education through education management organizations (EMOs). EMOs leverage a private sector approach to improving school administration, education delivery, and maintenance, in line with CMP’s initiative to reform and upgrade schools to better serve rural communities.

The successful pilot of EMOs resulted in strong demand from parents and communities wanting better management in their local schools, leading to six rounds of expansion of EMOs to more than 100 public schools. By assisting the Government of Sindh in establishing PPP policy reforms to manage EMOs, and by building local capacity to manage these partnerships, we helped institute a sustainable model for change.

Since EMOs were introduced, enrollment, attendance, academic performance, staff attendance, and community engagement have jumped. Our CMP team worked to ensure that local officials could continue building on progress, including publishing a Community Engagement Strategy and a PPP guide to encapsulate our experience and help scale up efforts in other schools, districts, or regions. 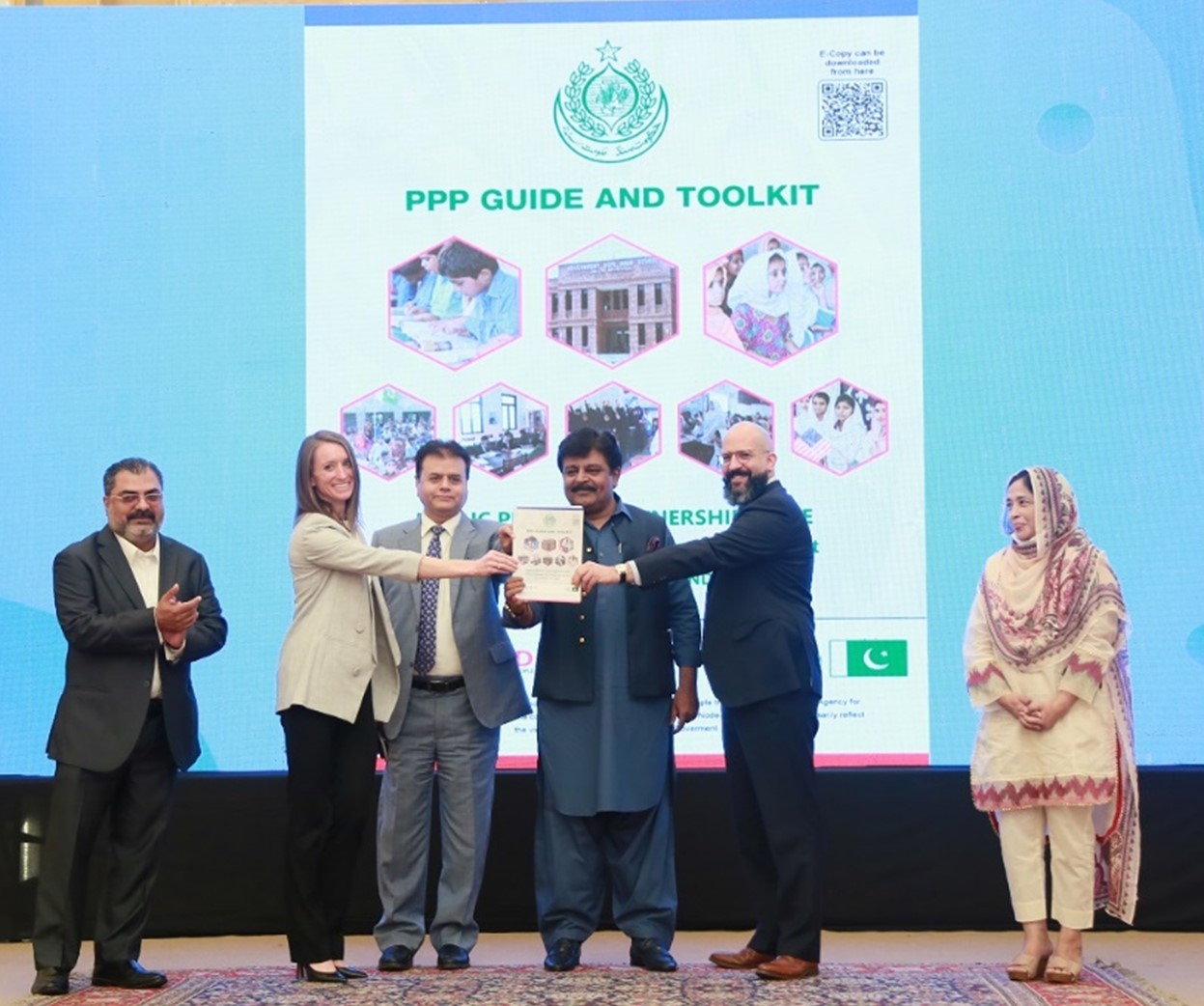 USAID and Government of Sindh officials at the handover of the PPP guide.

As schools grew both in size and capacity – thanks to the adept management of the EMOs and the dedication of SMCs – more and more families wanted to move their children from private schools into public ones.

“There are so many good people in the school system,” said Bachani, reflecting on the legacy of the program.

While the recent devastating floods in Sindh may affect the pace of continued reforms as it did in 2010, the foundation is there for education in Sindh to move forward.